One afternoon last May David Rothenberg arrived by bicycle with his clarinet to the basement studio of Bernhard Wöstheinrich in Kreuzberg. He descended the spiral staircase and the microphone was already set up. Headphones on, they began to play. Bernhard had loaded up samples of nightingales and other birds, just the kinds of sounds he knew David would like, combined with those signature Wöstheinrich pads and strangely sequenced rhythms. Several hours later they emerged with this evocative and mystical duet. All that remained was for Markus Reuter to assess and dwell upon the result, remixing it into its present otherworldly polished form. We are all subject to the process of adaptation, finding our place in the border between humanity and the beyond.

Recorded at Studio Modul303, special thanks to Lukas Schmolzi 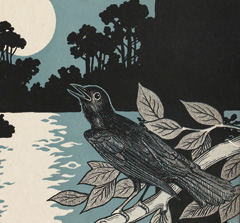